Okay it was actually a microburst during a monsoon. In Arizona, you can sometimes get a tiny localized torrential downpour and near-hurricane force winds during our thunderstorms that blow in first with a dust storm, then a downpour and lightning, and then just as quickly are gone. This means wind speeds of about 70 miles an hour, and I really do mean torrential rain–I think we got an inch in a half hour.

A microburst only hits a tiny area–maybe a mile radius. It hit our neighborhood–the noise was so loud, I thought it was hailing, but instead it was raining–sideways, because the wind was so strong. Afterwards, my neighbor’s tree was in my yard, my two large garbage canisters had been tossed down my side yard and broken, the ceiling fan on my back porch was mangled and broken, my barbeque had been shoved against my AC unit, and anything that wasn’t nailed down was against the side wall. Along my street, about two dozen trees were uprooted and torn out of the ground. A street light was blown over in another neighbor’s yard. Across town where another microburst hit, a semi-truck was blown onto its side onto a car on the freeway. This is about the closest we come to a tornado here.

I went for a drive to check my parent’s house which is in the next block over, since they were out of town. No damage over there whatsoever–looked like all they got was a bit of rain. 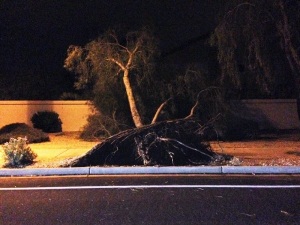 More pictures, including a shot of that semi truck: 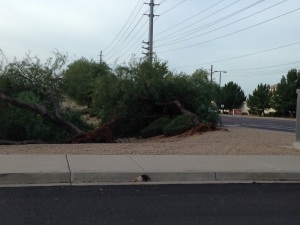 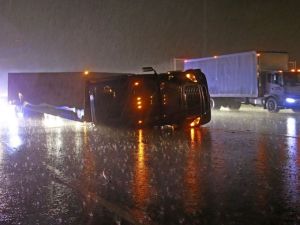