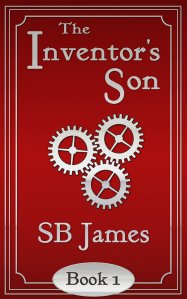 I know, it’s a rather unfortunate day for my interview series. But with a moment of silence for those who fell 9/11/01 and a big heap of hope for the future, I bring to you another up and coming indie author. Meet S. B. James, writer of Steampunk. You can find out more about S. B. at their blog here:  http://sbjamestheauthor.wordpress.com/

Before we begin, I’d like to thank you for having me here.

I used to love playing pretend when I was little. While pretending, I could make up my own universe and live in it. I viewed writing my own books as a way to create a world for other people to live in, at least for a little while. By seventh grade, I was writing stories for my own personal journal. Once I was assigned to keep a journal in high school, I felt I had a good excuse for writing in there during classes instead of concentrating on other things! Hey, it’s better than doodling, right?

2.   I see that you have a Steampunk series in progress. Tell me about that.

The Inventor’s Son is, in my opinion, perhaps a bit unusual in that its main character, Ethan Stanwood, is barely a pre-teen when the story begins. It begins in London in 1890, but it is not the London we know. For one thing witches, like Ethan, are legalized, which in reality was not the case even at that late date. Another difference: Scotland Yard has specialized departments to deal with the changing social landscape, including a Division of Peculiar and Supernatural Crimes, and a newly formed Division of Inventive and Scientific Crimes.

Ethan’s father is the inventor and scientist, and afflicted with what we now call Asperger’s Syndrome. His father does something very uncharacteristic one Monday morning; he flees the country, mostly because his former mentor and professor has come back to get revenge after being disgraced years ago. Ethan is assigned a seemingly simple task, to go and find Marcus and bring him a very important prototype of a project they have been working on together. Ethan, the dutiful son, leaves London with his father’s enemies hot on his heels. The series was meant to be more of an Indiana Jones/Dan Brown type of adventure, but I think, as this series progresses and Ethan grows up on the road, there will be more angst, like many Teen & Young Adult books tend to have.

3.   The first Steampunk novels came out over ten years ago, but it seems like it’s only gained real popularity recently. Why do you think that is?

When you say “recently,” that’s very true! One of the Steampunk communities I belong to on Facebook, Steampunk Tendencies, very recently heralded hitting the 400,000 member mark. He pointed out that 100,000 of them had joined in the past 37 days!

It would be great if the next really big book series was a Steampunk series! It includes a lot of things: alternate history, time travel, tea time and Victorian corsets, vampires, magic (both magician type and wave-your-wand type, like mine is), adventure, romance, horror, drama, comedy… But let me warn you, Steampunk is not necessarily fast reading. It’s immersive, and ideally, like any good book, Steampunk is supposed to make you forget about your life for a little while as you read it. I believe this is its appeal, while at the same time, Steampunk hearkens to a simpler time, even though it was not a simple era by any means, but I think a lot of us nowadays yearn to escape, at least for a short time, into a world where television and Instagram don’t exist.

Although there was one Steampunk book I read a while ago where the characters used something like a laptop computer… There are “rules” but they’re made to be broken if necessary, like all writing rules.

4.   Who is your favorite writer and why?

I had a lot of writers who I turned to when looking for reading material, but the single most influential one for me was Robert Jordan. JK Rowling could be considered a fairly close second, but I think Jordan’s Wheel of Time series taught me plenty of things (to do and not to do) about writing on a grander scale. Prior to reading The Eye of the World, anything I read seemed to be encompassed in one volume, especially since the majority of the books I was reading at the time were historical romances. One and done.

I’m working on the release of Book 2 of the Inventor’s Son Series, The Scientist’s Son, which is to be released by mid-September. Then, it’s Book 3, The Explorer’s Son, which I want to get released in time for the holidays. I also want to work on getting a print book of The Inventor’s Son combined with The Beginning in one volume in time for the holiday season. Further down the line, I’d like to get the rest of the series done, which will most likely be five books. Then I’d like to get audio versions done of them, if I think that’s feasible to do. And after I’m done with The Inventor’s Son, I’ve got my “Kindle Unlimited” series that I will begin to devote more time to, as long as KU is still around by then. Though it seems that Amazon is, at this point, throwing a lot of money into this, trying to lure authors back into KDP Select, so it might be worth my while to do something on this front.

Way down the line, I’ve got several other series planned, including a parody of the zombie/ apocalyptic genre, an urban paranormal vampire series, and a space opera, which I’ve put off to write the Steampunk books. And I cannot forget the prequel series to The Inventor’s Son!

6.   So if you were to invent something new and marvelous, what would it be?

You know, I would really love one of those Personal Helicopters that my characters are working on! In real life, last week there was a big accident on I-75 with a semi overturned and gas leaking out, so they needed to close the interstate in that area. It made my commute to work that day a nightmare! I imagined being able to just take a helicopter to work… Although I’m sure there would have to be a great deal of air traffic control if everyone started using those things!

7.   What have you learned about the publishing process?

I’ve learned a lot of things in a short amount of time, though I’d been researching long before I published. One thing I learned is that there is no one answer that works for everyone. I used to be leery of the permafree sales model, offering your first book in the series free so people aren’t nearly as hesitant to try out your books. I thought I’d get people who were reading my book without knowing what to expect. In order to accomplish permafree, I HAD to be out of KDP Select and had to be able to publish my book at other vendors. It remains to be seen whether or not it will pay off, but I’m thinking it will.

I also learned that the publishing world is in a state of flux, and what used to be true six months ago can be turned on its ear now. I got caught off guard with Kindle Unlimited, as did a lot of other authors, but all we can do is adapt. This is why I’m planning for a selection of books to be geared toward the Kindle Unlimited program. I’d be interested in knowing how many people have started actually paying for the service, and how many are still starting free trials. (I confess I haven’t started my trial yet.) One more thing I learned; we all go at our own pace. Some people sell a load of books right out of the gate (not many of them, TBH), and with others, it’s a slower build, as long as you keep the books coming. I’m thinking once I have three or four books on the market that things will really take off for this series.

8.   What advice do you have for other writers?

Keep writing! You never know what you’ll come up with, and the possibilities are far more open than they were even a decade ago.

This entry was posted in Author interviews, indie authors and tagged steampunk. Bookmark the permalink.

One response to “Author Interview: S. B. James”