I’m only going to do a couple more interview for the time being, as things are geared up for the release of my second novel. I probably will resume them after all the fuss dies down, probably in April or so. If you know a good book by an indie writer or an indie writer who would like to be featured, I’d love to hear about it. 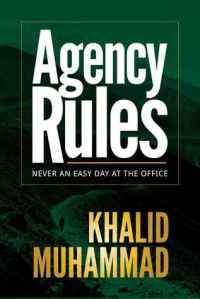 This week’s interview is with Khalid Muhammad, from Pakistan. You can learn more about Khalid on Goodreads here:

7th grade English. I had a teacher that believed that the best way to judge our understanding of her teaching was to have us write short stories. That’s where it started.

I wrote short stories for years across genres like crime, mystery, history and thrillers, never considered getting them published. I even wrote some poetry, but that wasn’t my cup of soup.

About 4 years ago, I started trying to craft a novel, but nothing came together in a cohesive manner. Well, until I started Agency Rules. It just clicked. It was like I was writing an extension of myself.

2. I see you enjoy thrillers. What about this type of book appeals to you?

The pace and the tone. Thrillers move quickly, the characters are graphic and the scenes draw you in, what about that wouldn’t make any reader want to read them.

I think the appeal as a writer in the thriller genre is that layers of the story that are crafted. It’s not something that you can read once and get it all, you have to go back and read it again, at least that is the case with me. I find myself reading Forsyth, le Carre and Clancy over and over, finding new deal, new threads and things that I didn’t notice in previous readings. I think that is the beauty of the thriller genre.

3. Tell me about your latest book.

Agency Rules – Never an Easy Day at the Office is a fast-paced thriller that takes you behind the headlines into the events that created today’s Pakistan. It is a tough look at a nation in conflict from the eyes of a young man, Kamal Khan, who is looking for his own identity and place in society. Kamal is raised in privilege, but leaves it all behind as a man to serve his nation. Once in that environment, he finds himself embroiled in a complex narrative that shifts with the fiery speeches of their anointed political and religious leaders.

The title of the book is Agency Rules – Never an Easy Day at the Office. It’s the first in a series of 4 right now, but if people like the story, I will probably expand it.

The message behind the story is quite simple – the Pakistan that you hear about in the media is not the real Pakistan. We struggle with everything that citizens of other countries struggle with, but we have it compounded with ineffective governments and terrorism. I wanted to introduce the readers to the Pakistan that I love, the one that you will find on every street and home of Pakistan. The characters are embodiments of the people that I see everyday. There is so much more to the country than what the media would like to tell you, and this is the first step in understanding it all.

4. How does your cultural background impact your writing, would you say?

Of course! I was born in Pakistan, raised and educated in the United States and moved back almost 17 years ago. The Pakistan that I found was one that was broken, beaten and abused. It was not the Pakistan that I had visited during my summer vacations from school. I poured a great deal of myself and the people that I encounter on a daily basis into the story, took from the headlines in the domestic and international media and crafted a story that helps readers understand what brought Pakistan to where it is today.

The country is not a terrorist state, as the Western media would like to portray it. It’s a country that is struggling to survive, with a citizenry that is confused about what course the nation they love has taken. Sure, we have differing opinions on what that course should be, but it seems that people judge Pakistan based on the 1% they see broadcast in the media, not the 99% that is struggling to survive.

5. Who is your favorite writer, and why?

It’s difficult for me to select a favorite writer, for the simple reason that I learn so much from everything that I read. I read everything from fiction to non-fiction, thrillers to business books, so the scope of that makes it difficult to pick a single favorite. I can tell you who has influenced me the most in my own writing.

There are actually two authors that I would want to meet. Stephen King because he writes fantastic characters and scenes. His books have taught me so much about how a story is crafted in the reader’s mind. The other is John le Carre.

le Carre is a master of the espionage genre. He creates stories that draw you in and bury you within the world that he has created. That is masterful for any aspiring writer. I would want to pick his brain.

6. What do you think has led to the success of your first book?

I don’t think that I can answer that question yet, being that Agency Rules – Never an Easy Day at the Office is my debut novel. Having just been released in January, we are still in the initial stages of sales with the book, but the reviews that have come in have been outstanding. It seems that everyone has enjoyed the book.

The story is something that has many layers. Since the story is not based in a country that people know a great deal about, it is more of a challenge to write and frame because the mannerisms and locations are unfamiliar. Then you have the characters, who all have their own agendas, hidden and open, which add color to the story. I didn’t write it with the intention of being an easy read. It will take someone who can think and understand to get everything that is in the book. It’s not a single read book.

7. Tell me about what you’re working on next.

That’s easy. I think I will be spending the next few months marketing Agency Rules – Never an Easy Day at the Office, while I research the next book in the series. I have a day job running a marketing and brand management company, so that keeps me quite busy as well. The future is what you make of it, so I plan to make something awesome.

8. What advice do you have for other writers?

So my advice to aspiring authors is simple – Never give up. There are so many reasons that you may stop writing, there are hundreds of people that will demotivate you when you are writing, but you have to take them with a grain of salt. You can’t achieve something when you are worried about what the naysayers think.

Thanks for letting me share with your audience, Judy! It’s always fun to answer questions about what made me write this story and why the reader should pick up a copy. It’s a great read and will have you on the edge of your seat throughout.

Born in Pakistan’s troubled Swat Valley, educated and raised in the United States, Khalid returned to Pakistan almost 17 years ago and fell in love with his country. His debut novel, Agency Rules – Never an Easy Day at the Office, is a journey behind the headlines about Pakistan, the world’s most dangerous place, to deliver an intense story that will challenge the reader to question what they have been told.