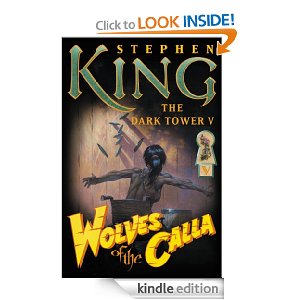 Those who know me know that I’m a big Stephen King fan, have been so since my friend first introduced me to the novel Firestarter when I was in 6th grade. The man is a story teller, and his popularity demonstrates that people love to read his stories. He has his strengths and weaknesses as any writer does. But overall, I really enjoy reading him.

Wolves of the Calla felt more like a western to me than some of the earlier Dark Tower novels, though of course there was always that undercurrent of the time travel/alternate worlds/science fiction thing as well.  I love that he brought the priest from Salem’s Lot into the plot. And I laughed when he even brought himself into the mix. Fourth wall anyone?

More than any other character, Jake really came into his own in this book. Up until now he’s been a child, thrust into these circumstances beyond his control. The others have tried to protect him and he’s had to face horrors, but in this book he actually has his own mission, to discover whether the father of a boy he’s met in town, a friend, is a traitor. And beyond that, he has to kill, and watch someone he knows and cares about die. By the end of the book, Jake is no longer a child. He’s a full-fledged gunslinger.

Bit by bit the mythology of Stephen King’s world(s) are coming together in these books. Susannah/Detta/Mia has her own demon (literally perhaps) to face, but her real trials will come in the next book. I also find it interesting that even though our main hero, Roland, still has his ‘powers’ of observation and cunning and wisdom, King has been knocking him down bit by bit through the books, first by taking away two vital fingers on his right hand, and now in this book with a creeping arthritis that threatens to shut him down. Writers, take note–I can’t think of another writer who is meaner to his protagonists. And it works.

So all in all, I enjoyed this. The middle had a few slow moments, most notably that Callahan’s tale was longer than I thought was necessary. But other than that? Really enjoyed it. I’m looking forward to the next one.

This entry was posted in Uncategorized and tagged book reviews, novels. Bookmark the permalink.